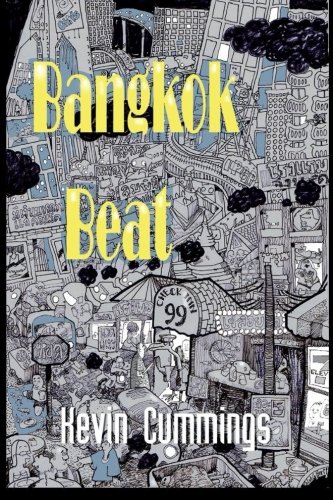 "Bangkok Beat is a celebration of a movement, a group of irregulars who have taken a different path." Christopher G. Moore, International Crime Authors Reality Check "Bangkok Beat is a flashlight in the dark." The Sunday Nation "[T]his is a fun read, told in a warm and humble voice devoid of literary pretensions or highfalutin prose, reminding readers of one of Bangkok's chief virtues: It's teeming with all sorts of eccentric expat characters endowed with hugely entertaining backstories." Jim Algie, Bangkok 101 Magazine "Cummings pools interviews with well-known brilliant creative individuals and ties that in with his own Californian childhood memories and his love of jazz. Read now or refer to later to find insights into some iconic expats who reside in a kind of Asian Montparnaisse district." Chad Evans, author of Vincent Calvino's World "Then there is Gop; a fictional frog who Kevin has interviewing a fictional detective, a truly surreal moment that, for me, personifies the surrealness that relocating to SE Asia can often produce." ​ Iain Donnelly, Editor of The Weekly Phnom Penh Bangkok Beat is a compilation of short stories, interviews, literature reviews and author profiles, plus the previously unpublished history and pictures of the iconic Bangkok cabaret nightclub, Checkinn99 located on Sukhumvit Road. In reading Bangkok Beat you will get up close with many well-known and not so well-known expats and characters staying in Thailand and Southeast Asia. You'll also find a section of noir poems by John Gartland, in which the author depicts life in the city's dark zone. Between the covers of Bangkok Beat you will get to know: champion male and female Muay Thai boxers, a surfing historian, a legendary mamasan, Chris Coles - noted expressionist artist of the Bangkok night, and a gold chain snatching ladyboy. You'll also encounter the inside of Baccara Bar on Soi Cowboy, an Australian front man for a Khmer band, a smiling waitress named Mook, a spirit house for a Hollywood screenwriter and producer, and the biographer for Jim Morrison and Elvis Presley. Plus world class musicians including Jason Mraz and a saxophone playing psychologist. In addition you'll find interviews and profiles of many well known novelists living in and writing about Thailand and Southeast Asia and one magician. This book of non-fiction is ably assisted with an introduction by Bangkok pulp fiction author, James A. Newman, a short story by T Hunt Locke titled The Beauty of Isaan and a chapter of noir verse written by the poet noir, John Gartland. Many of the 54 black and white photographs found in Bangkok Beat were taken by professional photographers Eric Nelson, Alasdair McLeod, and Jonathan van Smit.
Show More
Reviews