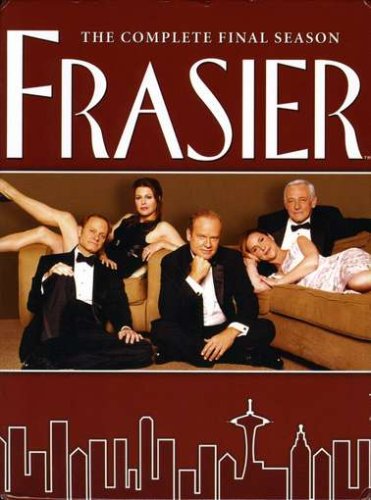 Brand : Paramount
from USA
to Colombia
in 5-8 days
At your doorstep by Aug 05  to Aug 08 with standard delivery

Midway through Frasier's redemptive final season (which earned Emmys for Kelsey Grammer and David Hyde Pierce), Martin Crane (John Mahoney) reassures his son, "Just when you think that you're in a rut and nothing exciting will ever happen again, pow, that's when it does." The same could have been said of Frasier's redemptive final season. Not that the multi-Emmy-honored series had ever really jumped the couch, but by its 11th season, it had lost some of its sparkle. And then, POW! Veteran Frasier writers Christopher Lloyd and Joe Keenan return to the fold. POW! Wendie Malick joins the seamless ensemble as brash lounge singer Ronee Lawrence, who becomes a love interest for Martin. POW! Daphne (Jane Leeves), underutilized since her marriage to Niles, becomes pregnant. POW! Frasier opens his own private practice. POW! Laura Linney guest stars as Charlotte, who becomes the hapless Frasier's own Miss Right. The series also benefited greatly from a stellar roster of character actors, who rose to the occasion of this gold standard series' final year. Penny Johnson (24), Sarah Silverman (School of Rock), and Dan "Homer Simpson" Castellaneta christen Frasier's couch in the episode, "The Return of Maris." Jennifer Tilly is at her ditzy, delectable best as a pick-up in "Miss Right Now." Laurie Metcalf replaces Emma Thompson as Frasier's first wife, children's entertainer Nanny G, in "Caught in the Act." Always welcome are Bebe Neuwirth as Lilith ("Guns 'N Neuroses") and Harriet Sansom Harris as Frasier's unscrupulous agent Bebe (the series finale, "Goodnight, Seattle"). But Frasier was never about stunt casting. It's the writing, stupid, which, actually, was anything but. Episodes such as "Boo," "The Doctor Is Out," "Coots and Ladders," and "Caught in the Act" recapture Frasier's unique blend of wit and farce. The series finale, in which relationships take a significant turn and Frasier finally breaks out of that rut to follow his heart, is as satisfying as fans could wish. --Donald Liebenson
Show More
Reviews