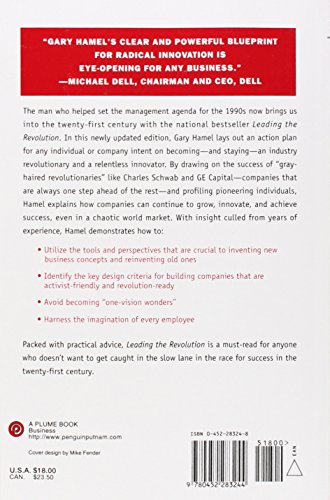 So much for the old economy, new economy divide. According to Gary Hamel, the professor-turned-strategy-guru author of Leading the Revolution, complacent establishment giants and one-strategy start-ups are on the same side of the fence--the wrong side. Corporate complacency and single-strategy business plans leave no room for what Hamel describes as the key to thriving in today's world of business: a deeply embedded capability for continual, radical innovation. Leading the Revolution is not a calm analysis of what will or won't work in a post-industrial world. Instead, it's an impassioned call for revolutionary activists to shake the foundations of their companies' beliefs and move from a linear age of getting better, smarter, and faster, to a nonlinear age of becoming different. While in the past incremental improvements in products and services were accepted as good enough, Hamel shows that true innovation is the demolition and re-creation of an entire business concept. He blows apart the popular myth that innovation lies solely in the hands of dot.com dynamos like AOL and Amazon by scrutinizing the examples of such "gray-haired revolutionaries" as Enron and Charles Schwab, companies that have managed to reinvent both themselves and their entire industries, time and again. After an in-depth examination of what business-concept innovation involves (for starters, it's "based on avoidance, not attack"), Hamel goes on to motivate his readers to see their own revolutionary future, and train them in the art of being an activist. As he puts it in various headings, be a novelty addict, be a heretic, know what's not changing, surface the dogmas. And then get out there and transform your ideas into reality. Not simply a round-up call, Hamel's book provides would-be activists with an intelligent, comprehensive plan of action. He illustrates each imperative with examples of real-life corporate rebels, such as John Patrick and David Grossman at IBM, Ken Kutaragi at Sony, and Georges Dupont-Roc at Shell. His message is the same to "old" and "new" companies alike: "Industry revolutionaries are like a missile up the tail pipe. Boom! You're irrelevant!" So join the revolution and avoid the explosion. Hamel writes in a clear and compelling voice, preaching with passion but supporting what he says with detailed, experiential evidence. Each chapter is packed with probing questions and inspirational examples that aim to dig through the apathetic corners of your mind and throw hand grenades into any creative synapses still slumbering. Even the alternative (read innovative) design of Leading the Revolution will jolt you into a new level of awareness and imagination. Indeed, the only problem you might have with this book is an increasing desire to put it down before the end, get out there into the wild world of the activist, and start living the revolution. --S. Ketchum
Show More
Reviews